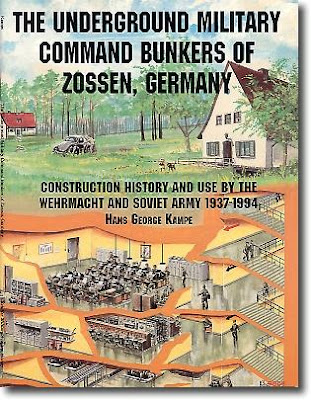 Located 25 miles south of Berlin, the Zossen underground complex of bunkers and tunnels served as the protected communications nerve center first for the German armies under Adolph Hitler’s command and later for the Russian forces occupying East Germany.

Originally cleared as a firing range and infantry school, by 1914, the 60,000-acre area had become Europe’s largest military base, dotted with handsome buildings, some of which survive to this day. Bunker complexes called “Maybach” (a command center) and “Zeppelin” (communications) were built beginning in 1934 by the Nazi regime. The initial communications links constructed in 1934–1935 involved considerable redundancy to better withstand air attack. The Zossen bunker complex was well connected with subterranean links to the military commands in central Berlin, and to a trunk cable ring buried around the city. Priority construction of the Zeppelin bunker in 1937– 1939 involved installation of dozens of massive telephone and telegraph switchboards. Most were operational by August 1939 in time for the German attack on Poland. Radio facilities were also added. Substantial battery backups guaranteed continued operation even with loss of the electric power grid due to air attack. The Allies never discovered the existence of these backups until after the war and bomb damage was largely superficial, indicating that the backups had not been targets.

Allied interrogators were aware of the Zossen compound as early as July 1944 by virtue of an interrogation of a Feldwebel who was captured in Italy. The Feldwebel had served at Zossen for some time and gave his interrogators considerable information about the facility, although the extent of the communications system does not appear to have been emphasized in this particular report.

Fast-moving Soviet forces occupied the virtually intact Zossen bunker facilities on 20 April 1945. Some German officers - with a view beyond Götterdämmerung - had the good sense to display large placards in Russian, in and around that telephone exchange saying This equipment is NOT to be destroyed or tampered with! A foresight that served postwar communications in the chaos very well. Most equipment was dismantled (often quickly and thus badly) and shipped back to the Soviet Union.

Description
Plans were drawn up prior to the Nazi period for a protected HQ for the High Command, Chief of Army Transport and the General QM. Zossen, south of Berlin, had been a military training camp since Imperial times and was chosen as the appropriate site.

The decision to begin work at Zossen as an underground military communications centre codenamed "Zeppelin" was taken in August 1936. Construction took from 1937 until just before the outbreak of war.


The telephone/telex bunker "Amt 500" covered 4881 sq.m on two levels. Walls were up to 3.2 metres thick, ceiling was 3 metres thick concrete with an outer 1-metre thick shell above it.


MAYBACH I consisted of twelve concrete structures disguised as residential houses, each 36.2 m x 16.39 m. There were two levels of fortified underground cellar, a single ground level floor and another level in the roof, all sub-divided into rooms. The houses were hermetically sealed against gas attack. Water was supplied from underground springs. All buildings were connected by an underground gallery. Maybach I was occupied by the Army General Staff on 26.8.1939 and it was from Zossen that the orders were issued, and retracted, for the attack on Poland scheduled for that day. The OKW command centre was transferred to Zossen from Berlin on 29.3.1943.


MAYBACH II was completed during the war as a Fuehrer-HQ: it consisted of 23 more buildings similar to those at MAYBACH I, seven of which were allocated for Hitler and his entourage. Hitler never occupied MAYBACH II mainly because he felt uncomfortable at being surrounded by Army personnel. The other buildings were occupied by Army Transport. Other branches joined later in the evacuation process from Berlin.


In the major US air raid on 15 March 1945, 675 heavy bombers inflicted damage amounting to the destruction of several wooden barrack huts and putting the main telephone cable out of use for two hours.


Zossen was evacuated before the Russian advance on 20 April 1945 and fell more or less intact into Soviet hands. Once the state-of-the-art telephone equipment had been carted off, the entire site was reported destroyed by explosives. However it later served as the HQ for Soviet Forces in Germany (GSTD), and passed to the Federal Republic in 1994.


Source: Seidel and Zeigert: The Fuehrer-HQs, Greenhill Books 2004. There is more information contained in this book relating mainly to the telephone/telex side.

Last Days at Zossen
Twenty kilometres south of Berlin in the huge underground headquarters at Zossen there was a mood of profound anxiety. The day before, when the threat of Soviet tanks coming up from the south had arisen, General Krebs had sent off the OKH's small defence detachment in reconnaissance vehicles to investigate. At 6 a.m. on 21 April, Krebs's second aide, Captain Boldt, was woken by a telephone call. Senior Lieutenant Krankel, commanding the defence detachment, had just seen forty Soviet tanks coming up the Baruth road towards Zossen. He was about to engage them. Boldt knew that Krankel's light armoured vehicles stood no chance against T-34s. He informed Krebs, who rang the Reich Chancellery to ask permission to relocate the headquarters. Hitler refused. Shortly before the 11 a.m. situation conference, tank guns could be heard clearly in the distance. One staff officer observed that the Russians could reach Zossen in half an hour. Another message arrived from Krankel. His attack had failed with heavy losses. There was nothing left to stop the enemy tanks.

General Krebs appeared from his office. `If you're ready, gentlemen,' he said, and thus began the very last conference of German general staff officers. It was hard to keep their minds off their imminent capture by Soviet armoured forces and the prison camps which awaited them in Russia. But there was no more shooting. The tanks had halted north of Baruth because they were out of diesel. And finally, at 1 p.m., General Burgdorf rang from the Reich Chancellery. The OKH was to move its headquarters to a Luftwaffe base at Eiche near Potsdam. Their companions in the adjoining OKW bunker system were to move to the nearby tank base at Krampnitz. The decision was taken only just in time.

A larger convoy of vehicles and non-essential personnel left Zossen on a hazardous journey to the south-west and then on down to Bavaria. They knew nothing of Lelyushenko's tank brigades crossing their path ahead, but instead they were hit by one of the last Luftwaffe sorties. The German pilots misidentified their vehicles. The smaller party, meanwhile, headed for Potsdam, on a parallel route to Lelyushenko's tanks.

Late that afternoon, Soviet soldiers entered the concealed camp at Zossen with caution and amazement. The two complexes, known as Maybach I and Maybach II, lay side by side, hidden under trees and camouflage nets. It was not the mass of papers blowing about inside the low, zigzag-painted concrete buildings which surprised them, but the resident caretaker's guided tour. He led them down into a maze of galleried underground bunkers, with generators, plotting maps, banks of telephones and teleprinters. Its chief wonder was the telephone exchange, which had linked the two supreme headquarters with Wehrmacht units in the days when the Third Reich had stretched from the Volga to the Pyrenees and from the North Cape to the Sahara. Apart from the caretaker, the only defenders left were four soldiers. Three of them had surrendered immediately. The fourth could not because he was dead drunk.
A telephone suddenly rang. One of the Russian soldiers answered it. The caller was evidently a senior German officer asking what was happening. 'Ivan is here,' the soldier replied in Russian, and told him to go to hell.

The two Maybach bunkers were destroyed by 1946, but the Zeppelin communications center was retained, albeit empty of equipment. In the 1950s, new construction reactivated the surviving Zossen bunkers and by 1960 fear of a missile-based European war led to re-equipping of the Zeppelin bunker area as a communications center. It could be totally self-sufficient (including air circulation) for up to a month. At the height of the Cold War between 30,000 and 70,000 Russian soldiers and their dependents were based there in an extensive surface community. All of this was manned for more than three decades, ending only when Russian troops pulled out in 1994.

The long-time military zone was opened for civilian development after the Cold War, and scores of old barrack buildings have since been reconditioned into apartments. Tours are given in some of the surviving bunker sites, some of which retain their Soviet-era equipment.